In our prior article titled, “How to Estimate the Value of a Private Business,” we discussed the mechanics of estimating Enterprise Value by utilizing a Multiple of Earnings Before Interest & Taxes (“EBITDA”). While the calculation itself is relatively straightforward, achieving a realistic approximation of Enterprise Value can be challenging given that EBITDA multiples can vary by 60% or more! Narrowing this gaping chasm to a meaningful range requires considering the effect of critical macro (i.e., strength and trajectory of the economy, cost and availability of capital, regulatory environment, etc.) and micro (i.e., company specific) factors.

Macro factors, while impactful, are largely outside the control of management and thus we will focus on critical micro factors within management’s control. Beauty being in the eye of the beholder, it is reasonable to assume individuals will identify and ascribe different levels of import to different factors. That being said, the following seven critical micro factors, presented in no particular order, are widely accepted to have a substantial impact on Enterprise Value:

It should be noted that not all revenue growth is created equal. Recurring revenue growth will be more highly valued than an equivalent sized company experiencing a revenue spike due to a significant, one time project.

The magnitude, or absence, of customer concentration, significantly influences Enterprise Value.  Other things being equal, companies having significant customer concentration, which we define as any single customer responsible for more than 20% of annual sales or any 3 customers generating over 50% of annual sales, command lower than average EBITDA multiples than industry peers possessing equivalent revenues and profitability yet with a more diverse customer base.

It is possible to minimize the potential negative impact of customer concentration on value by acting as a sole source supplier and/or having favorable long-term agreements with large customers.

Companies whose revenues are concentrated within a particular end market are more susceptible to the impact of sector specific variables, such as its cyclical nature, the introduction of new regulations or disruptive technologies, increased competition, etc.  In certain situations, industry concentration may be viewed positively.  For instance, a company serving an end market growing faster than Gross Domestic Product (“GDP”) may command a premium EBITDA multiple. Industries currently growing faster than GDP are plastics, medical, and aerospace, to name a few.

Strength and Depth of the Management Team

It is not uncommon for smaller companies to be overly dependent on the entrepreneurial talent of its CEO/Owner who may be primarily responsible for more than one key functional area. While such situations are not unusual, over-reliance on a single person results in, or the perception of, increased business risk. All else being equal, the market is more apt to assign a higher value to a company possessing a more complete management team with talented individuals leading the key functional areas of Sales and Marketing, Finance, Engineering, and Operations.

Warren Buffet eloquently addressed the subject of competitive advantages when saying “….so we think in terms of that moat and the ability to keep its width and its impossibility of being crossed as the primary criterion of a great business. And we tell our managers we want the moat widened every year.” In other words, sustainable competitive advantages serve to protect the business from the potential intrusion of competitors, thereby reducing business risk and increasing growth prospects. Consequently, the market is willing to ascribe a premium multiple to a company having a moat, which may come in the form of intellectual property, unique capabilities or services and/or proprietary processes to name a few.

Ultimately, business valuation is more of an art than a science and the factors influencing Enterprise Value are not intended to be an exhaustive list. However, recognizing and assessing critical valuation factors can highlight areas needing improvement and allow one to develop realistic value expectations.

The chart below provides a rough estimate of the multiple ranges someone can expect for a manufacturing company with certain characteristics. 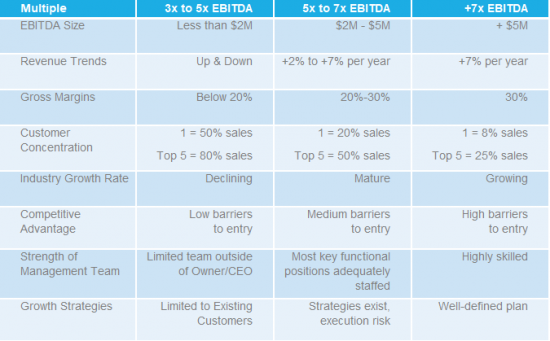 If you are interested in learning more or have questions concerning the foregoing please contact Bobby Kingsbury at bobby@mcmcapital.com.

Calculate the Value of Your Business

Wondering how much your enterprise is worth? Use our online Valuation Calculator and quickly receive an estimation range for the value of your business.