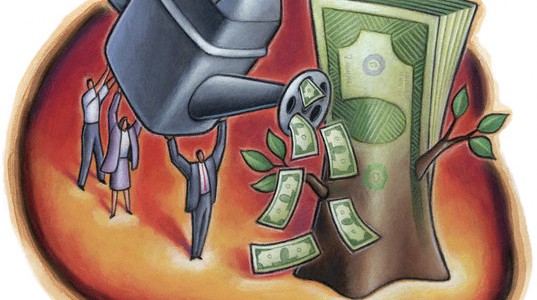 I have been reading the fascinating and informative Warren Buffett biography, “Snowball”, which does a wonderful job of profiling his career and investment approach.  The book recounts Buffett spending countless hours pouring through Standards & Poor’s  financial reports in the early 1960s trolling for ignored, undervalued companies (“unloved cigar butts”) trading at discounts to book value and, in some cases, discount to net working capital.   His savant like focus on investing, disciplined investment approach and a target rich environment helped contribute to out-sized returns, the envy of any venture capital or LBO general partner.   However, over time the market became more competitive and by the 1990s the proliferation of software and widely available (thank the Internet) electronic information tools significantly increased market efficiency reducing the number of bargain purchase opportunities and impacting Buffett’s ability to replicate his earlier out-sized success (although it should be noted he has consistently done better over many years than the S&P index).

The LBO market has undergone a similar phenomenon.  In the mid 70’s through the mid 80’s early players such as KKR and Thomas H. Lee enjoyed a relatively barren competitive, yet target rich, landscape.  Owners of small and middle market privately owned businesses ($< 500 million) seeking exits had rather limited options; a sale to a strategic acquirer or a handful of private equity funds.  Further, the 1960’s corporate strategy of building conglomerates to diversify market risk produced many under-managed and hence undervalued “non-core” operations.  There were few if any investment bankers serving this market, thus it was common for private company owners or corporate sellers to be under represented in the context of marketing the company.  Corporate divestitures commonly assigned the responsibility to internal staff, which in many cases lacked the transaction sophistication or incentive to maximize value.

Consequently, the LBO market was by today’s standards woefully inefficient resulting in attractive, at least from a buyer’s perspective, enterprise values.  Not surprisingly, in such a buyer friendly market it was much easier to generate outstanding returns.  In fact, Thompson Venture Economics, reports average 1980-1985 vintage year returns of 35%-54%.  However, by the mid-1980’s these attractive returns generated more competition, capital and better representation.   The mid 90’s brought the introduction of the Internet and email as mainstream tools, dramatically enhancing the ability of intermediaries to efficiently communicate with the buyer and seller community.   Today, sophisticated databases products such as CapitalIQ increase market efficiency by, among other things, tracking buyer preferences, maintaining purchase price comparables and enhancing deal coordination and distribution.   These changes in technology and increased competition have resulted in far greater market efficiency (i.e., higher purchase prices) and thus, it is no longer the norm to achieve attractive returns by relying on a favorable purchase price largely financed with leverage.

Accordingly, at MCM Capital, our approach focuses on identifying post acquisition value enhancing strategies.  For example, in our assessment of Dexmet, one our current portfolio holdings, former ownership was focused on maximizing current dividends at the expense of investing in new business development and managerial talent.  Historically the company generated solid profitability and was outstanding operationally and technically; however, it was highly dependent (85% of revenue) on one product application, expanded foils used in primary lithium ion batteries and had virtually no new business development programs.   Additionally, the company operated out of two small manufacturing facilities leading to meaningful operating inefficiencies and a less than cohesive team.  In fact, I like to tease Bob Bochman, now Dexmet’s President and one of the few executives we retained from the prior team, about a question he posed  to me during our due diligence process, “Why would MCM ever want to buy Dexmet?”.  Fortunately, it turns out Bob is far greater advocate for Dexmet today. Our profit enhancement and shareholder value creation strategy included:

Easier said then done.  Implementing the above necessitated a substantial upgrade in managerial talent starting with replacing the CEO, VP of Sales and CFO.  At close, we introduced a new CEO, Mr. Harry Shimp, a MCM Board of Advisors member, who possesses outstanding team building and commercial development skills.  Within the first six months he addressed various managerial shortcomings by moving and replacing certain team members.  Within 18 months of closing the company identified a modern manufacturing facility and flawlessly executed the relocation of both former plants (thank you Bob Bochman), without losing any key talent, driving substantial savings.  This played a critical role in management profitably navigating the Great Recession of 2008-2009.  Over the last four years later the Company has relentlessly and successfully pursued new market applications to great effect, as a result, the battery market represents less than 50% of total revenues.  Further, EBITDA has doubled and the senior and mezzanine acquisition financing has been retired.

The LBO market has become fiercely competitive and thus to ensure long term success it is imperative to have a clear post acquisition value creation strategy (Adding Stuffed Olives to the LBO Martini) and the right team capable of executing as the “cigar butts” have turned to ash.  This ain’t your grandpa’s LBO market.