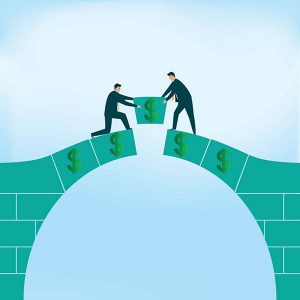 Without question, the most advantageous time for a business owner to consider an outright sale or recap of his/her equity is during expansionary economies where the company has shown steady growth, appears likely to continue on that upward trajectory, and capital markets are flush with cash.  Unfortunately, economic cycles don’t always align with a business owner’s plans for wealth diversification. Most buyers base their valuations on trailing twelve month’s EBITDA, a measurement business owners rightfully feel is artificially depressed during a deep recession.  One option for entrepreneurs is to put off a transaction and wait for more advantageous conditions.  However, this is not the only option for business owners seeking a fair value for their company.

At MCM Capital, we have completed transactions in virtually all macro-economic conditions ranging from the dotcom bust and 9/11 attacks through the middle of the Great Recession as well as more benign growth environments.  Certainly, deep recessions make it challenging for selling shareholders to garner sufficient value to make a transaction attractive for both parties; however, creative transaction structures can be instrumental in bridging valuation gaps during extraordinary times.

This is by no means an exhaustive list but meant to highlight a few alternatives to getting a deal done in unfavorable economic conditions.  It is also particularly applicable, but not exclusive, to a partial sale utilizing a leveraged recapitalization (“recap”) structure.  The following tools may create a win-win for both the selling and buying shareholder:

An earnout is a contractual provision providing the seller of a business additional compensation in the future if the business achieves certain pre-defined thresholds.

While earnouts are most commonly employed when there is a gap between what the buyer is willing to pay and what the owner believes the business is worth, they are also used to share in the potential risk of future (albeit short-term) growth that can’t be easily accounted for by using a simple EBITDA multiple. In essence, an earnout allows the buyer to mitigate risk while positioning the seller to benefit from near term company growth after the sale closes, and receive payment if/when the company achieves specific goals commonly built around achieving certain levels of EBITDA.  Consequently, earnouts work best when the selling shareholder is looking to maximize cash proceeds in the short term (12 to 24 months after close), the company continues to operate as a standalone entity and the triggering event is easily measured and closely aligned with the value of the business.

We have occasionally used earnouts to bridge a value gap created by, for example, reliance on the continue support of an outsized (>15%) customer. For instance, we entered into an agreement to recap an aerospace company manufacturing 3D printed and molded parts, serving the defense and commercial aviation markets, for $30 million in total consideration, including 40% of retained equity.  During diligence, it became known a critical defense customer intended to develop a second source for an existing program generating approximately $2.5 million of EBITDA out of a company total of $4.5 million in EBITDA.  The seller expressed doubt the customer would be successful in this initiative, but it was an issue we could not ignore.  Fortunately, both parties were committed to finding a mutually acceptable resolution.  After exploring several alternatives, we eventually settled on a transaction structure which lowered the cash purchase price by $4 million at closing and replaced it with an earnout which triggered a like payment based on achieving a cumulative EBITDA measured at the end of two years.  This structure assisted us, as buyers, to ensure we were properly capitalizing the company in the event a significant profit stream was compromised without unduly penalizing the seller who thought the loss of any portion of this program was unlikely.  It is doubtful a deal could have been consummated without an earnout.

A clawback gives one party the right to repurchase a certain amount of equity at a stated value if certain conditions are met.

In contrast to earnouts, a clawback works best when the Selling shareholder has a longer-term focus and prefers to make business decisions centered around shareholder appreciation as opposed maximizing cash proceeds in the near term.  A clawback works in a similar way to an earnout but allows the Buyer to “clawback” equity retained by the Seller at close under certain scenarios.  As a consequence, a Seller will not be unduly penalized by the softness currently confronting the company and the Buyer has recourse should the softness not be transitory. For example, several years ago we were pursuing an attractive recap opportunity with the founder of a medical components company generating superior margins, growing nicely and possessing several competitive advantages.  It was led by “Bill”, its 63 year-old CEO/founder and sole shareholder who wanted to continue to lead the company, retain 25% equity ownership and pocket a targeted amount of cash at close.  Based on the company’s recent 2-year history Bill’s valuation expectations were reasonable.  Unfortunately, the company was now operating in recessionary conditions which negatively impacted the company’s earnings by 25% and temporarily stilted its growth.  Understandably, the owner was loath to compromise on any aspect of his aforementioned economic goals but also didn’t want to wait potentially 2-3 years to revisit a transaction.  We were able construct a compromise which met his cash and retained ownership goals by incorporating a clawback to bridge the value gap.  More specifically, at the close of the transaction the seller received his targeted cash amount and 25% retained equity interest subject to a clawback giving MCM the right to purchase up to 10% of his retained equity if certain thresholds were not met.  In our case, we established a threshold based on a minimum total shareholder value measured at the 5-year anniversary of the transaction, or earlier if a controlling interest in the company was sold.  Importantly, the structure we employed allowed Bill capital gains treatment on the portion of his equity subject to the clawback.  I am happy to report within 18 months the company was growing again and thus the founder ultimately retained his desired 25%. For more information on our investment in Bill’s medical components company, click here.

Performance shares are equity awards, typically given to senior managers provided certain specified performance criteria are met, such as EBITDA targets or appreciation in a company’s enterprise value.

When properly constructed, performance-based stock awards closely align management interests with that of the Company’s shareholders.  They also can be used in bridging value gaps whereby selling shareholders are expecting a substantial increase in value due to, for instance, the end of recessionary conditions, anticipating outsized growth from the launch of new customer programs, etc.   We commonly use a flavor of this type of program to reward selling shareholders and management for exceeding mutually defined expectations.  MCM recently used this program to get a deal over the finish line.  The company is a provider of technically exacting metal working services catering to aerospace and medical customers.  The CEO and sole shareholder was anticipating 20%+ EBITDA growth within 18 months of closing and didn’t want to be short changed by prematurely selling a controlling interest.  Consequently, we were approximately $5 million apart; however, we were able to get a deal done by agreeing to award a meaningful additional amount of Performance Based Stock provided certain [EBITDA] requirements were met, further aligning our collective interests.  We included the broader executive team, comprised of a younger, talented group who would not otherwise be in a position to acquire equity , in the Performance Based Stock Award pool, creating further alignment throughout the organization.

An ill-timed economic downturn can throw a wrench in a business owner’s plans to diversify his/her wealth by suppressing earnings, and consequently, eroding the value buyers assign to their Company. Fortunately, a multitude of options exist to bridge valuation gaps when they arise, each with its own nuances which can be tailored to an individual’s goals and comfort levels. Please feel free to contact us if you would like a more in-depth discussion on utilizing these creative M&A deal structures.

Mr. Mansour founded MCM Capital Partners in 1992 with the backing of high net worth investors and co-founded the first institutional fund, MCM Capital Partners, L.P. in 1998. His responsibilities include the execution of investment transactions and management of portfolio companies. Mr. Mansour serves on numerous portfolio company Boards including Amrep, Inc., Dexmet and Inservco. Mr. Mansour received a Bachelor of Science Degree in Business Administration from Wittenberg University and a Master's Degree in Business Administration from Miami (Ohio) University. Mr. Mansour is a Certified Public Accountant.

As the private equity industry has matured, massive capital inflows and the proliferation of industry professionals has created competition across all segments of the marketplace....read more →

Imagine sitting at the final table of the World Series of Poker.  The first hand has just been dealt and you occupy a cushioned seat...read more →

GOING BACK TO SCHOOL

After a 20-year hiatus from the classroom, I recently had the opportunity to reconnect with my most influential professor from graduate school, Dr. Allen Michel....read more →