Firing on all Cylinders

Generally speaking, the economy is firing on all cylinders as evidenced by S&P 500 25% earnings growth and 8% revenue growth in Q1 2018. Business leaders are feeling optimistic as capital spending growth in Q1 was up around 25%, its highest in seven years, and no doubt influenced by changes in the corporate tax code. Further evidence of the economic robustness can be seen in the labor market as manifest in first time jobless claims, which are testing lows not seen since 1969!, and are trending well under the 350K line, indicative of an expansionary economy, as depicted below: 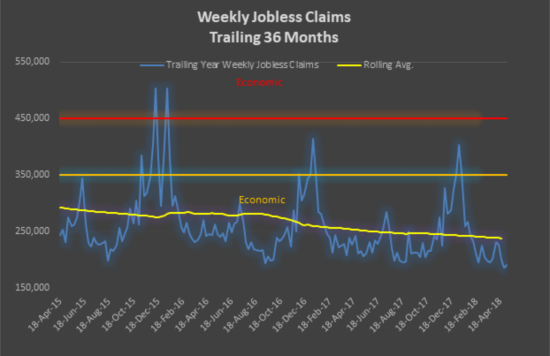 Headline unemployment is hovering around 4% which many consider to be practical full employment.  Certainly many of our portfolio company CEO’s would agree as they are being challenged to fill positions and retain talent.  The reality is, if one wants to work, and is employable, one can easily find a job.

Not surprisingly, we are starting to see upward pressure on wages as evidenced below: 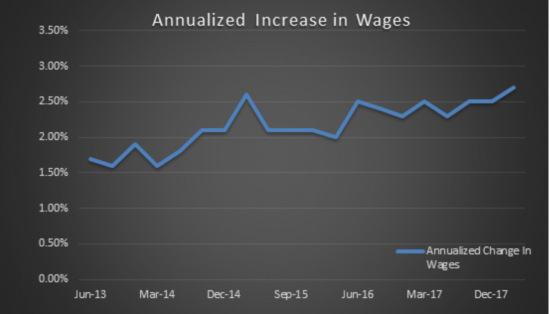 As I contemplate all the good news surrounding the current economic environment I wonder if there isn’t a corollary to the old expression, “It’s always darkest before the dawn” … perhaps, “it’s always sunniest before the storm?” In any case, most of the recent financial data is and has been good to very good. However, the economic expansion is going on 34 quarters, well past the historic average duration of 26 quarters.

Consequently, a common question being asked on Bloomberg, CNBC and many others is “when will the next recession begin?” Stating the obvious, the only certainty is a recession will occur.  One of the most reliable predictors has been the slope of the yield curve, i.e., the delta between long-term and short-term interest rates.  The greater the spread is generally indicative of stronger GDP growth.  Conversely, an inverted yield curve, whereby short term rates exceed that of long term rates, has predated the last seven recessions by periods from 1 year to 2.5 years. 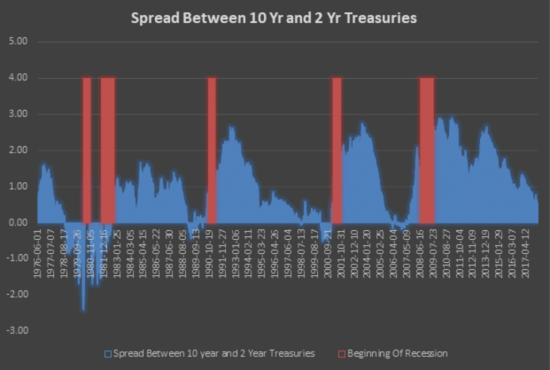 As indicated in the chart above spread has been narrowing causing concern despite the blizzard of good news.  Our sense is the next recession will not occur until mid 2020…please don’t quote me.