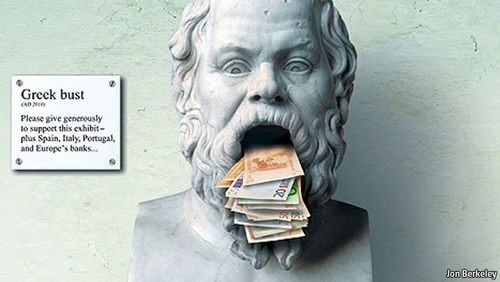 Before addressing our views on the US economy, I wanted to share a brief rant on Greece for which I will apologize in advance. I have been following this Greek tragedy with morbid fascination. In a nutshell, the Greek economy is suffering through a deep recession (aka The Greek Depression) exacerbated by the austerity measures put in place in 2010 in return for EU, IMF and European Central Bank financial support. These measures included reigning in social spending and actually making a concerted effort to collect taxes. So how did Greece get into this predicament? Like all economic failures there are multiple drivers, however, consider under current regulations Greek workers can elect early retirement at age 58 earning 80% of their full pension payments and full benefits are earned at 61. Is it any wonder the Germans, who recently increased their retirement age from 67 to 69 (U.S please take notice), are outraged at being asked to bail out the Greeks. Further, the Organization for Economic Co-operation and Development (“the OECD”), which among other statistics, reports Greece’s GDP per hour worked, a measure of labor productivity, at a trifling 53, , among the lowest in the developed economies. By contrast, the OECD ranks the U.S. 4th in labor productivity with a score of 100. Their history of overly generous social programs, low productivity and inability to collect taxes has resulted in Greek sovereign debt ballooning to an unsustainable 175% of GDP, significantly higher the rest of the EU as shown below.

Not surprisingly, the Greek citizenry have not embraced their fiscal reality and have taken to the streets to protest the increase of the pension age from 61 to 63…oh the horror. Additionally, the Greeks recently elected Prime Minister Alexis Tsiprasan, a self-admitted apostle of Marxism, who is blaming the IMF and other EU countries for irresponsible lending as the cause of Greece’s predicament. I haven’t seen the end of this movie, but am reasonably confident it includes a train wreck.

Before we get too smug and go around tsk, tsking the Greeks for their irresponsible spending and resulting borrowing that followed, let’s take a peek at our sovereign debt trends presented in the following graph.

Our domestic debt burden, while not as severely crushing as Greece’s, has exceeded 100% of GDP for the prior two years and is trending alarmingly up in spite of higher tax revenues, driven by out of control Federal spending. In fact, the US now has the 7th highest Debt to GDP among the developed world. Let’s pray the next administration, be it Democrat or Republican, brings a modicum of financial acumen to Washington. Ok, I’m done.

Despite tepid global economic activity in Europe and Asia our economy is functioning quite nicely, thank you very much. Continued good signs for a growing economy are emanating from the labor market which added an average of 254K jobs per month in 2014, up from an average of 188K in 2013, although wages have remained stubbornly flat. Further, consumers are feeling ~ $100/mo richer these days due to the precipitous drop in gas prices. The aforementioned has contributed to the consumer feeling good these days as evidenced by the University of Michigan Consumer Sentiment for January, which registered a 98.1, a strong increase from last month’s 93.6. This is the highest monthly sentiment score in eleven years.

The Federal Reserve Bank of Philadelphia survey of 39 economists, predict an annual real GDP will grow 3.2 percent in 2015, up 0.2 percentage points from the previous estimate. I’ll leave forecasting GDP to economists but will echo the prevailing positive consumer sentiment. At the risk of appearing to be whistling in the dark over geopolitical concerns involving the Russian – Ukraine border war and the almost unfathomable cruelty of ISIS, we feel the current attractive business climate will continue throughout 2015.