Home Education Blog It Is Too A Recovery….I Think

It Is Too A Recovery….I Think 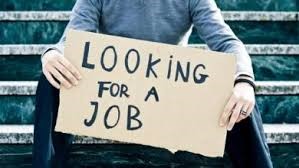 The great recession hit bottom in Q4 2008, with GDP contracting a whopping 8.9%, followed by 2 subsequent quarters of GDP contraction.  The economic recovery began in Q3 2009 as evidenced by 1.4% GDP growth and subsequently the US economy has generated positive GDP growth in each successive quarter through Q4 2012.  During this period, impactful industries, such as housing and automotive, have rebounded and general manufacturing activity has picked up, albeit from historically low levels.   Then why don’t I feel like we are in recovery? Perhaps it’s due to the shallowness of this recovery as evidenced by the following chart depicting cumulative GDP growth in the current and three prior post-recession recoveries. 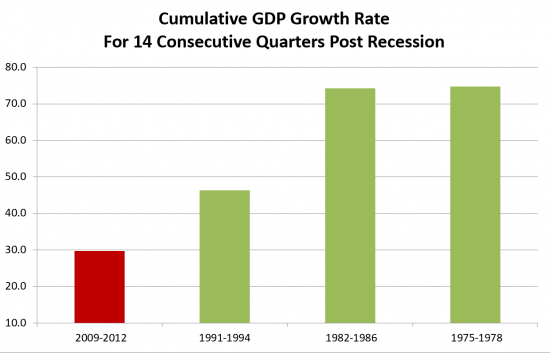 Source: US Department of Commerce, Bureau of Economic Analysis

The above chart begs the trillion dollar question, why is this recovery so underwhelming?  One plausible answer can be found in stubbornly disappointing employment data.  We are now 45 months into a post-recession recovery, yet the unemployment rate hovers around 7.5% with much of the improvement resulting from job seekers giving up on their employment search and thus are conveniently not counted as unemployed.  In fact, the work force participation rate (i.e., the percentage of working-age adults in the labor force) is at a 34 year low of 63.3%! The following chart depicts the unemployment and work force participation rate since January 2000 to provide a frame reference. 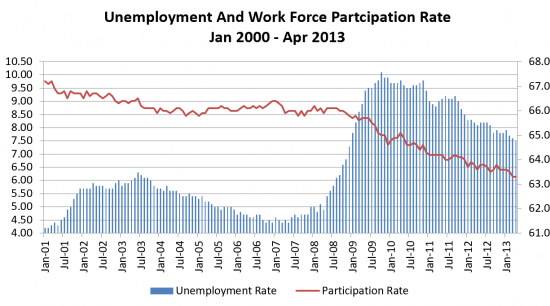 Source: US Department of Labor, Bureau of Labor Statistics

The US Federal Reserve has consistently maintained it will keep interest rates low by purchasing up to $85B in US Treasuries and mortgage backed securities per month until the unemployment rate drops to 6.5%   As point of reference, assuming a 64% labor participation rate, the US labor market would have to create 229,000 new jobs per month for the next two years in order to achieve this modest target. That level has only been achieved 8 times over the prior 45 months.

In speaking with our portfolio CEO’s and many other business leaders, a few consistent themes emerge:

So what is the good news?  Over time, the power of the free enterprise system will guide us to solutions to the above challenges.  Until then, I suspect we will continue to experience consistent, albeit tepid GDP growth and historically high unemployment levels.