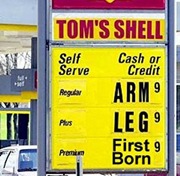 First the good news…Corporate earnings have been good to great and manufacturing output remains healthy; The PMI has remained well north of 50, reflective of an expansionary manufacturing economy, for 18 consecutive months through January 2011. In fact the PMI hit 61 in January, its highest level since May 2004. Our portfolio, being largely manufacturing centric, is experiencing stronger revenues and bookings consistent with the PMI trend line.

However, the unrest which started in Egypt has spread to Libya and is causing well founded fears over possible disruption in oil supplies. Gasoline prices have skyrocketed over the last week to a national average of $3.51 per gallon according to AAA, Wright Express and the Oil Price Information Service representing the most ever for this time of year, when prices are typically low. (Mark Mansour and I are currently in San Francisco where gas has already reached $3.99 a-gallon for regular and $4.35 for premium making the picture posted above quite apropos) And with the price of crude oil cascading over $100-a-barrel for only the second time in history, analysts say pump prices are likely headed even higher. Americans are now paying 34 cents more for a gallon of gas than when the Libyan crisis started, an increase of about 11 percent. A thought to provide a little perspective in the rise in cost: every 10 cent increase in gas prices equates to an additional $14 BILLION per year that goes towards gas instead of other discretionary purchases according to Peter Bockvar, an equity strategist at Miller Tabak. That means over the last two weeks consumers have lost roughly $47 billion of discretionary spending.

Diane Swonk, chief economist at Mesirow Financial in Chicago, says this year’s cut in payroll taxes offers consumers a buffer against higher fuel prices. However, Americans are less prepared to absorb the spike in gasoline prices than they were the last time prices rose this high, in 2008, because unemployment is higher and real estate values are lower. And the longer prices stay high, the more damage they do prompting some analysts to fret pump prices across the nation could soon hit the $4 a-gallon psychological barrier and stall the US’s nascent economic recovery. Tom Kloza, chief oil analyst at the Oil Price Information Service, believes that the normal seasonal rise in prices has been pulled ahead by events in the Middle East, and he expects prices to rise further. He predicts prices will reach $3.50 to $3.75 a gallon, and possibly $4 per gallon barring more chaos in the Middle East. “When we get over $3.75 we are looking at very serious consequences for the economy,” he says.

High fuel prices along with the increase in food costs are leaving consumers concerned just as they are starting to feel better about the economy as the jobs report, one of the most highly anticipated on Wall Street, was better than expected. The Labor Department announced last Friday jobless applications fell near a 3-year low, non-farm payroll employment increased by 192,000 in February, up sharply from 63,000 the month before, and the unemployment rate unexpectedly eased to 8.9%. Economists surveyed by CNNMoney had predicted an increase of 190,000 jobs in February, while the unemployment rate was expected to rise to 9.2%. Job gains occurred in manufacturing, construction, professional and business services, health care, and transportation and warehousing.

However, there is still enough disconcerting economic data to keep us, and our portfolio CEOs, a bit nervous. Fears loom as an underlying concern that political instability could spread elsewhere in the Middle East fueling (no pun intended) the rise in oil prices and spark inflation putting a substantive dent in consumer purchasing power. The spike in petroleum will also force tough choices on small business owners who are reluctant to charge more for fear of losing cost-conscious customers. Further, analysts and economists worry that by lowering profits for businesses and reducing disposable income for drivers, high gasoline prices are going to slow the recovering economy. Over a year, analysts estimate, oil at $100 a barrel would reduce U.S. economic growth by 0.2 or 0.3 of a percentage point which would likely mean tepid hiring and higher unemployment. Unfortunately, uncertainty in our economy will remain until oil prices stabilize at an affordable level for the average US consumer.